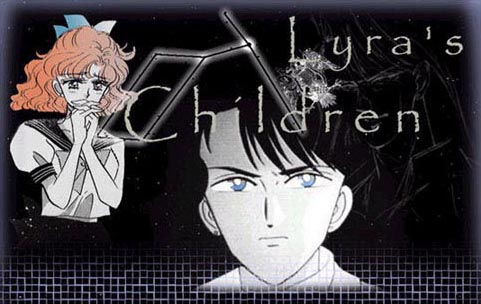 "The tears of Vega of Lyra filled up the heavens... Her fiance cannot cross the flooded Milky Way to see her."
--Nephrite, the Wedding Dress episode

"Orpheus was the sweetest singer and most accomplished musician the world had ever seen. His lyre, said the ancient Greeks, was presented to Orpheus by Apollo himself. When he played and sang, wild animals gathered around and even the trees swayed in harmony.
"When his bride, Eurydice, was bitten by an adder and went down to the land of the dead, Orpheus could not be consoled. Taking his lyre, he followed her spirit.
"He came before the King and Queen of the Shadowy Realm, Hades and Persephone. Orpheus begged them to restore his wife to him and to the sweet sunshine. Charmed by his music, they agreed, but on one condition. They commanded Orpheus to lead the way back to the world and never turn around once to see whether his wife was following him.
"He succeeded in that until the very last moment. As Orpheus was about to step up onto earth again, he did glance anxiously back over his shoulder. Yes, his wife was still behind him, but only for a moment longer. Pale with horror, he watched her fade back into eternal darkness."
--from "The Universal Myths," Alexander Eliot

After this, Orpheus forsook human company and wandered in the wild, playing for the rocks and trees and rivers until he was killed by a fierce band of Thracian women. Even after he was beheaded, his head still continued to call for Eurydice. His lyre was taken up into the heavens and became the constellation Lyra.

"A man would know the end he goes to, but he cannot know it if he does not turn, and return to his beginning, and hold that beginning within his being. If he would not be a stick whirled and whelmed in the stream, he must be the stream itself.... Now turn clear round, and seek the very source, and that which lies before the source. There lies your hope of strength."
--Ogion the Mage, "A Wizard of Earthsea," Ursula K. LeGuin

"Though lovers be lost, love shall not;
And death shall have no dominion."
--Dylan Thomas

The Nephrite and Naru Treasury